The proposed bailout didn't sit really well with me when I first heard about it, since it felt like rewarding people for making bad decisions, and it didn't help the people that are really feeling the pain -- i.e. the people getting kicked out of their houses.

This is not to say that I think people should get rewarded for buying a house they couldn't afford, but if you're trying to prop up the economy by dumping government money into it, I'd much rather it went to people whose worst mistake is not being able to do math than people who intentionally engaged in high-risk investment and then covered it up with an impenetrable paper trail.

But what do I know -- my expertise is in getting chips to work, not finance. A lot of commentators are blasting congress for not immediately giving Paulson the $700 billion blank check he was looking for, but recently economists are singing a different tune.

Politico summarizes the reaction of a number of economists, and a wide spread of economists signed this letter.

Luigi Zingales summarizes how I feel (with better credentials):

For somebody like me who believes strongly in the free market system, the most serious risk of the current situation is that the interest of few financiers will undermine the fundamental workings of the capitalist system. The time has come to save capitalism from the capitalists.

His full paper is here.
Posted by Guy at 4:07 PM No comments:
Email ThisBlogThis!Share to TwitterShare to FacebookShare to Pinterest
Labels: politics 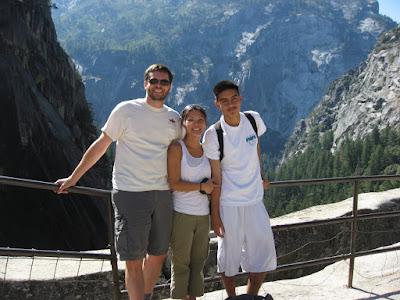 Last weekend I flew to to the Mariposa Airport along with Joahnna and Zach as part of a Tradewinds fly-in to Yosemite. Dave, one of the pilots, organized the whole outing, including figuring out the logistics of how to get from the Mariposa airport to Yosemite.

This ended up being a cab ride from the airport, with three trips to get all 11 of us to the Mariposa visitor's center where the YARTS bus stops.

The bus ride in took around two hours, and we ended up in Yosemite around noon. We grabbed a quick bite to eat and I pushed for the waterfalls hike. Once on the hike we split up into two groups, with the three of us as well as John S. and his girlfriend Cathy outpacing the rest of the group.

On the way up the stairs to get to the Vernal fall, the group started flagging a bit. John and Cathy turned back and I egged on Joahnna and Zach to keep going for the top. The steps to the fall are reasonably steep, so it's a pretty good workout to get there.

Once at the top I gave Zach a quick briefing on what I had in mind, then posed for a "photo" with Joahnna. Before the photo was taken, I said "just wait a second, I have a question for you" and pulled the ring out of my pack. I gave my proposal on bended knee and, fortunately, it was accepted.

Joahnna bubbled for a bit while I grinned, and passers-by congratulated us. We talked to one couple that said that they had proposed at this spot ten years ago, which we thought was a good sign.

After that we started back down, since time was short and we weren't sure if we would be able to make the bus ride back. We pushed down at an aggressive pace and managed to make the 3:30 bus with a minute to spare.

Joahnna napped for part of the bus ride back and spent the rest of the ride playing "I Spy" with Joshua, the grandson of one of the other pilots. We received another round of congratulations from the pilots in the Tradewinds group. Back in Mariposa, we woke up Zach, everyone piled out and we caught the first taxi shuttle back to the airport. 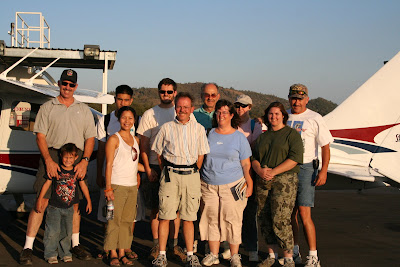 I took the opportunity to gas up the plane with the cheapest avgas I have seen recently ($5.07) while the taxi shuttled in the other two groups, and then we posed for a quick group photo before taking off into the evening sun. We landed just as sun set, at 7pm.

Afterwards we invited Joahnna's family over to our house for drinks and chatted a bit before heading to bed. After a full day of flying and hiking (plus a couple of gin and tonics) we slept very, very well.
Posted by Guy at 1:11 PM 1 comment:
Email ThisBlogThis!Share to TwitterShare to FacebookShare to Pinterest
Labels: flying, travel, wedding

This link is an article about 5 steps (modeled on the "DEFCON" system used by U.S. strategic command) from situation-normal to Great Depression-style economic meltdown.

The steps and descriptions come courtesy of Nouriel Roubini, a professor of economics. The interesting thing about this article is that it was originally published in february, and at the time of writing we were at Defconomy 5. Now we're somewhere around 3 or 2, and it's played out almost exactly as described.
Posted by Guy at 2:20 PM No comments:
Email ThisBlogThis!Share to TwitterShare to FacebookShare to Pinterest
Labels: politics
Newer Posts Older Posts Home
Subscribe to: Posts (Atom)