Jon has decided to silly thing (defined as silly, of course, by the fact that I would never attempt such a thing. Myunique activites are not silly, of course -- they merely enchance my character). To wit, he has decided to break the unsupported, unresupplied speed record for the John Muir Trail, and he's launched a blog to document the attempt. I'll let you read all about it for yourself.

I think the distances involved would probably kill me, but I'm certainly interested to see how Jon's progress goes.
Posted by Guy at 2:48 PM No comments:
Email ThisBlogThis!Share to TwitterShare to FacebookShare to Pinterest 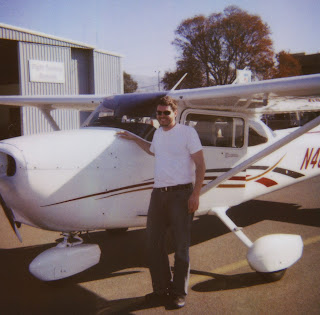 Today I achieved my first major milestone in my flight training, which was my first solo flight. I was a little nervous going into it, but I figured if my flight instructor thought I was up to it, and the rental company was willing to toss me the keys to a $180k plane, then I must really be ready.

The event itself was, fortunately, uneventful. I made three circuits in the pattern with my instructor in the plane, then after the third landing, he had me taxi over to the "instructor bench", where he sat and watched while I made three more circuits on my own.

After my third landing, I taxied back and picked him up, after which we returned to the office/classroom for the festivities. This involved a couple after-action photos and a ceremonial shirt-doodling, as well as congratulations by the office staff and other instructors.

I spent the rest of the day bouncing inside.
Posted by Guy at 10:16 PM No comments:
Email ThisBlogThis!Share to TwitterShare to FacebookShare to Pinterest
Labels: flying

I was reading this article on CNN about "signing statements" that Bush appended to a recent postal services bill. I found this interesting because, although I may have slept through a few social studies classes, I had never heard of such a thing as a "signing statement" (link goes to Wikipedia article).

The practice, he added, "is harming the separation of powers."

Not surprisingly, Bush has used more signing statements in his term in office than all 42 presidents before him combined.
Posted by Guy at 11:56 AM No comments:
Email ThisBlogThis!Share to TwitterShare to FacebookShare to Pinterest
Labels: politics

Ahh, the joy of submarine patents. For those of you not familiar with patent lingo, a "submarine patent" is one where the owner of the patent surfaces, seemingly from nowhere, at an inopportune moment.

Usually after you have completed the design and testing and are shipping millions of units. Like in this example -- the patent licensing company for Washington State University has just asserted a patent covering Bluetooth. Which is used, oh, pretty much everywhere these days.
Posted by Guy at 9:58 AM No comments:
Email ThisBlogThis!Share to TwitterShare to FacebookShare to Pinterest
Labels: politics, tech

Busy day for the blog today. To kick off the New Year (and to make my new shiny labels more relevant) I switched my blog to a new look and feel. I liked the austere look of the old template, but as I work in the networking industry, I also felt a need to increase the bandwidth consumption on the internet.

I'm creating a market for fiber-to-the-home one bit at a time.

Update:
Labels are very cool. I've gone back and labelled a bunch of my old posts, so now you can find all my travel info more easily.
Posted by Guy at 2:00 PM No comments:
Email ThisBlogThis!Share to TwitterShare to FacebookShare to Pinterest
Labels: meta

Also played around a little bit with labels, which will allow those of you who are only interested in, say, my political rants, to skip past my posts on the progress of my flying career. I'm not sure that my legions of fans have swelled to quite the number where they are incapable of sorting through this on their own, but I'm usually willing to take some shiny new piece of technology for a test-drive.
Posted by Guy at 1:51 PM No comments:
Email ThisBlogThis!Share to TwitterShare to FacebookShare to Pinterest
Labels: meta

I was spending some quality time Googling today, and ran across this kit to do an electric conversion of a Porsche 914. It could make an interesting summer project, and of course it would be available much earlier than the Tesla...

I was a bit worried when I didn't see any 914s for sale on Trader Online (finally found one in Arizona), but apparently that's because they're just not expensive enough. A quick search on Craigslist found 7-8 of them for under $3000.

First need to get the Morgan out of the garage, though.
Posted by Guy at 1:33 PM No comments:
Email ThisBlogThis!Share to TwitterShare to FacebookShare to Pinterest
Labels: electric

"To fly 7 million light years to O'Hare and then have to turn around and go home because your gate was occupied is simply unacceptable," said union official Craig Burzych

The funny thing is that I found this on CNN, and as opposed to the tabloids...
Posted by Guy at 3:28 PM No comments:
Email ThisBlogThis!Share to TwitterShare to FacebookShare to Pinterest
Labels: humor

Over the Christmas holiday, I watched "Who Killed the Electric Car", an interesting documentary on the history of electric vehicles in the 90s. The story primarily covers the vehicles created after California's historic mandate to make 2% of all vehicles on the road zero-emissions vehicles, and the subsequent development of the EV-1 by GM.

The short answer to the film's title question is that GM killed it, and in a very emphatic manner. When the leases on the EV-1s expired, GM did not allow owners to renew the lease or purchase the cars, but instead forced them to return every EV-1 to GM, where they destroyed. No question about it, GM wanted those vehicles gone.

One of the lessons I picked up from this is how easy it is to buy into hype. The EV-1 was a workable electric vehicle -- it had good acceleration, decent styling, and a range of 120 miles, which is good enough for any normal commuting. But shortly after the vehicles were coming out, many questions were raised about battery life, recycling, accident danger due to acid spills, total environmental impact, etc. And I remember giving these arguments some weight, since they are legitimate concerns.

The problem is, although these concerns are legitimate, they are also mostly non-issues when you dig into them. The batteries could be completely recycled, battery life is mostly a problem with lead-acid batteries rather than the NiMH batteries the EV-1 used, acid is far less dangerous in an accident than gasoline, and even if more coal-fired plants were built to provide the electricity, they still put less carbon in the atmosphere total than a gas burning car.

And whoever raised these issues, probably knew all that. 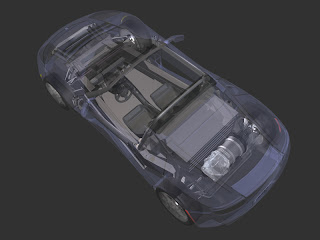 Which is why my hopes are with a couple new companies making next-generation electric cars with state-of-the-art battery technology. Tesla Motors, a new silicon-valley startup, is building a line of high-performance electric sports cars, with a range of about 250 miles. Full production won't start until 2008, and it will probably be a year or two after that until we see something a bit more affordable, but hopefully they'll have a sports sedan out in time to replace my Subaru STi.
Posted by Guy at 11:19 AM No comments:
Email ThisBlogThis!Share to TwitterShare to FacebookShare to Pinterest
Labels: electric
Newer Posts Older Posts Home
Subscribe to: Posts (Atom)