A steady stream of monsters and princesses are ringing my doorbell tonight. One little girl came up with her sister still in mom's arms. I put some candy in her bag and then some in her sisters', and she looked at her bag, then me, and said "Yum yum".

I agreed -- after all, it's candy and it's yummy. However, clearly I was just a someone dense adult and didn't really get it, because she held her bag up and a little bit closer to me, and said in a more insistent tone, "Yum yum!"

I'm slow but I can take a hint. I gave her more candy and she walked away happy.
Posted by Guy at 7:17 PM No comments:
Email ThisBlogThis!Share to TwitterShare to FacebookShare to Pinterest 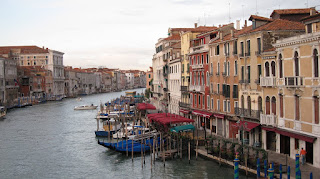 This shot shows the main canal taken from the Rialto bridge. The main canal is the highway through the center of Venice, and carries most of the motor traffic which goes through the city. Smaller specialized delivery barges go through the side canals to drop off and pick up goods and supplies.

Venice is a bit of a contradiction - many parts of it, such as the buildings, gondolas, and pedestrian walkways, seem unchanged from what they would have been two hundred years ago. On the other hand walking down one of the main thoroughfares feels like walking through a modern mall - all of the modern shops and brands are represented, and you can get anything from Ferrari logo wear to cell phones to Prada.

We mostly walked around the city but also used the Vaparetto to get to and from out hotel and take a tour of the city. The vaparetto is the city bus/ferry system, which stops at points along the main canal and the outside of the city, as well as a couple outlying islands.

We also met a number of Italian-speaking Filipinos, who seem to have a lock on the Venice hotel industry.

Posted by Guy at 7:55 AM No comments:
Email ThisBlogThis!Share to TwitterShare to FacebookShare to Pinterest

Living at the Airport

Due to an unfortunate pair of connections, we have a seven-hour layover in the Rome airport. It's just long enough to be tempting to leave the airport and do something else, but not actually long enough to go somewhere. So we have some time to kill here. Thanks to a data plan purchase for the iPad, we have Internet access at the airport, but I am approaching "the end of the Internet". I've read up on all my email and current news items, and sadly forgot my barnes and noble password to buy new books with.

Joahnna and Luc both have the right idea, as they spent the last couple hours sleeping. Of course Jo is small enough to curl up in an airport chair and Luc travels with his own portable sleeping bag, so they did have a bit of an advantage on me.

Doug is supposed to land in a few minutes, and my mom arrives a couple hours later, after which we have a short flight to Palermo. Should be more driving and less walking for the next week.
Posted by Guy at 1:46 AM No comments:
Email ThisBlogThis!Share to TwitterShare to FacebookShare to Pinterest
Labels: travel

JR and I rented scooters last night and took a quick moto tour of Rome, which also gave me an opportunity to experience Roman traffic fifs-hand. Thanks to prior experience on a race track it wasn't too hard to get used to, but it bears little resemblance to driving in the US or Australia.

Unlike the US, there are no lanes. Every square inch of pavement is fair game. Whoever is in front has the right of way, so if you can get your nose in front of the other vehicle. There do not appear to be any speed limits other than prudence, however Rome is congested enough and there are enough pedestrians and obstacles to effectively limit speed to about 50mph. This is just a guess, I didn't look at my speedo at any point during our ride.

That said, there are rules to driving here. I'm not sure how they are enforced; certainly the Carbinieri are far too busy smoking cigarettes and looking cool in their Armani uniforms to do anything as prosaic as write tickets, but nonetheless rules are followed. Pedestrians are yielded to, although only if they walk in front of your vehicle, red lights are obeyed, and cars do not drive in the opposite direction lane (some fudging is allowed on that last one).

Traffic is heavy during commute hours but there are lots of back streets and alternate paths. You can get stuck on back streets because they are frequently only one car wide, and parking in the middle of the street (thus blocking the entire street) is fair game for delivery trucks, or anyone wishing to have a quick chat with a friend.

I gave the scooter back at the end of the night unharmed, and with no perceptual gas usage. Fun trip!
Posted by Guy at 4:04 AM No comments:
Email ThisBlogThis!Share to TwitterShare to FacebookShare to Pinterest
Labels: travel

Tired out by tummy time 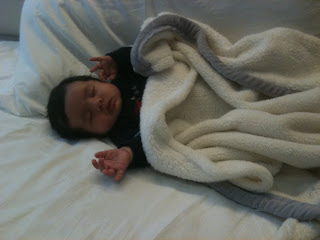 Luc takes a quick nap after an exhausting bout of tummy time.
Posted by Guy at 11:55 PM No comments:
Email ThisBlogThis!Share to TwitterShare to FacebookShare to Pinterest

Just had a chat with Adam and helped him diagnose an electrical problem on his motorcycle. This is a new first for my phone-support checklist. While we were talking we joked about Luc having his own twitter feed. I realized it would go something like this:

Posted by Guy at 4:15 PM No comments:
Email ThisBlogThis!Share to TwitterShare to FacebookShare to Pinterest 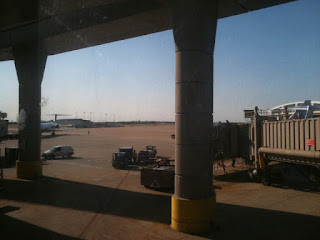 I'm killing some time between flights at the Dallas airport. Like everything else in Texas, this airport is big - seven runways, five of them parallel.

Inside is the usual airport amenities - Starbucks located between my arrival and departure gates. Had over an hour this time so enough time to get some breakfast.

There is a kiosk at my gate with power and free Internet, provided you have a cat5 cable. Sadly my little ipad has no ports on it whatsoever so I'm left to post this from my phone.

Only one more flight to go!

Posted by Guy at 6:58 AM No comments:
Email ThisBlogThis!Share to TwitterShare to FacebookShare to Pinterest
Older Posts Home
Subscribe to: Posts (Atom)