It was raining lightly when we loaded up the bikes, but we figured that wouldn't be a problem. By the time we got to Metcalf, it was actually raining. Nonetheless, our bikes are built for this weather, and we'd never actually ridden in mud before, so off we went.

This is how we looked before we started riding: 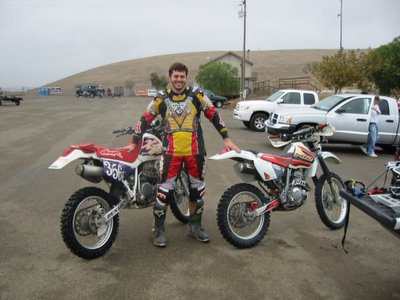 And this is how we looked after three hours of playing in the mud: 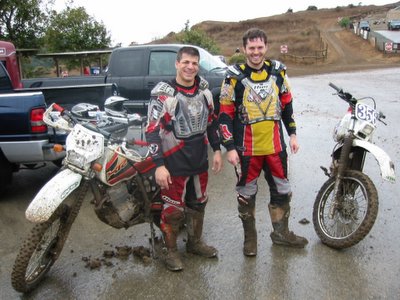 Unfortunately, the downside was that after all that, it took about an hour and a half to wash/scrape all the mud off our bikes.
Posted by Guy at 10:49 PM No comments:
Email ThisBlogThis!Share to TwitterShare to FacebookShare to Pinterest

I went to visit my grandparents last weekend to attend my grandfather's 90th birthday. We had a good-sized party that my mom arranged, with almost all of my grandpa's grandchildren in attendence. This was pretty cool, since there were a couple of them that I hadn't seen in over 10 years.

My mom put together a slide show covering my grandfather's life and accomplishments. It was pretty impressive, and contained a few surprises -- apparently he started out his working career as a miner in Nevada.

All in all a good trip, except that I forgot my pillow and had to have it mailed back to me.
Posted by Guy at 4:55 PM No comments:
Email ThisBlogThis!Share to TwitterShare to FacebookShare to Pinterest

I was reading an article on the adoption of ODF as a document format by Massachusetts, and found this tool on the CNet news site.

The tool is a fascinating visualization tool, that creates a map of the subjects and stories that are related to this story -- a topic landscape, if you will. Bringing up the page shows the Mass story at the center, a number of other related stories around it, and also shows links to Microsoft, Novell, IBM and Sun, which are all companies that have been involved in the ODF discussion (Microsoft against, everyone else for), as well as some general topics: Standards, Government, Politics, State Government, etc.

Given that one of the major topics of dinner the other night (with a couple other engineers) was "information overload" and what technologies can be used to help people deal with today's volume of information flow, this is a promising direction: it takes search to the next level, by describing the relations between the topic you're looking and and other relevant topics.
Posted by Guy at 11:35 AM No comments:
Email ThisBlogThis!Share to TwitterShare to FacebookShare to Pinterest

It's been clear for a while that content owners are willing to go to some fairly extreme lengths to protect their content from copying (fair or otherwise), but this article illustrates how far they're willing to go, and how much they respect you and your rights in the process.

In case you didn't read the article, or it all looks like techno-babble to you, let me break it down: If you play a new Sony audio CD in your computer, it will install a virus on it.

That's right, a virus. The article doesn't call it one, but it meets criteria of a "Trojan Horse" virus: It installs itself without any action on your part, it does not announce its presence, it takes active measures to prevent its removal, and it impairs the functionality of your computer. The big difference is that this wasn't written by some angry teenager in his basement, but by a multi-billion dollar corporation.
Posted by Guy at 1:27 PM No comments:
Email ThisBlogThis!Share to TwitterShare to FacebookShare to Pinterest
Newer Posts Older Posts Home
Subscribe to: Posts (Atom)