Adam sent me a link to this interview on Fox with Naomi Wolfe. It's admirable how she keeps her cool throughout the interview as she refuses to follow the interviewer's script, and he grows increasingly frustrated. He attempts to side-track her entire book with a straw man ("don't you believe enemy combatants should be in prison?"). At the end he declares the "debate" a victory for him because she hasn't "answered my question".

The most surprising thing about it was that she agreed to even show up.
Posted by Guy at 9:20 AM No comments:
Email ThisBlogThis!Share to TwitterShare to FacebookShare to Pinterest
Labels: politics

Joahnna and I went to Dave Le's birthday part last weekend. First time I'd seen Dave in many years. True to form, he had a surprise for us: 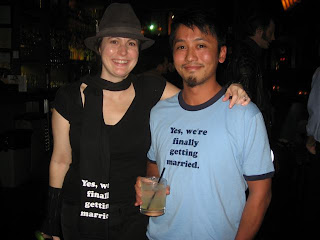 I've known Dave long enough that I simply ignored whatever wierdness was printed on his shirt for a few minutes, until someone else commented on it and I actually read what it said. After that, I had to ask if it was actually true, at which point I congratulated the lucky couple.

Also ran into Chris Napoli at the party, who is back in town after a decade in North Carolina. He's currently at loose ends, and "thinking about" getting a job.
Posted by Guy at 4:38 PM No comments:
Email ThisBlogThis!Share to TwitterShare to FacebookShare to Pinterest 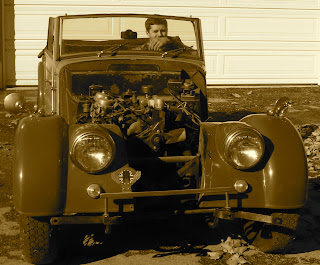 Last weekend one of Adam's friends came by to take a look at the car. He's looking for a project to work on, and the Morgan seems to be about the right effort and price level. Faced with its imminent loss, Joahnna decided we needed to get some photos of the Morgan before it's gone. 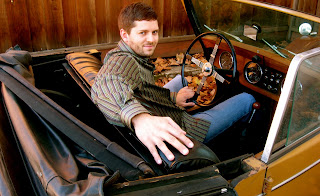 Looks nice, doesn't it?
Posted by Guy at 4:34 PM No comments:
Email ThisBlogThis!Share to TwitterShare to FacebookShare to Pinterest 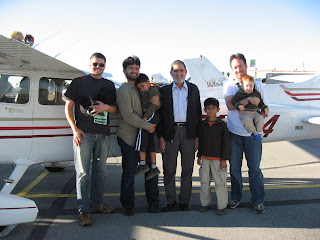 I gave rides around the airport a few weeks back, taking Danger for a ride, as well as Awais and his kids. A good time was had by all, although I think the passenger that had the best time was Awais' father. He's worked in aviation for his entire career, but this was the first time he'd been in a small aircraft.
Posted by Guy at 4:25 PM No comments:
Email ThisBlogThis!Share to TwitterShare to FacebookShare to Pinterest
Labels: flying

I was browsing used plane ads today, looking for low-priced aircraft, and came across an ad for a Soviet L-29 jet trainer: 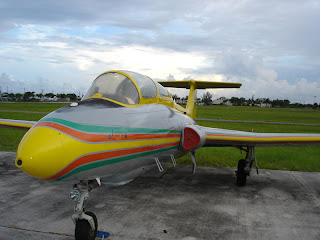 For only $18k, it seems pretty tempting. Unfortunately there are a few downsides to the aircraft. For starters, it burns about 210 gallons of Jet-A per hour, which runs about $950 at today's prices. And an hour is about all you get, because that's most of the fuel in the plane.

But it looks fun...
Posted by Guy at 5:26 PM 2 comments:
Email ThisBlogThis!Share to TwitterShare to FacebookShare to Pinterest
Labels: flying

I was halfway through this CNN article on gun proliferation when I just had to take time out for a rant. Early on, supporters of the Brady bill put the blame for this situation squarely on congress for not renewing the assault weapons ban:

[Robert Tessaro for the Brady Campaign] lays the blame squarely on lawmakers who allowed the assault weapons ban to expire in 2004.

Designed to be fired from the hip, assault rifles such as the AK-47 can spray at a rate of up to 600 rounds a minute in full automatic mode. It is the weapon of choice for guerillas and gangsters.

Now, if we're going to get technical about things here, the AK-47 is a fully-automatic assault rifle, which is currently illegal, and has been illegal since 1934 (Wikipedia article). So we're already seeing some misdirection here, but it's possible that legally-acquired weapons are falling into the wrong hands and being used by criminals. Is that the case here?

Hmmm, later on the article reveals that:

"The streets of South Florida are being flooded by AK-47s and assault weapons from old Soviet bloc countries. It's driven the price down, making the availability greater," said Chief Timoney.

Really, from old Soviet Bloc countries, you say? Meaning, probably not imported by an authorized arms dealer or legally sold?

I'm all for solving problems, but one reason for letting the Brady bill lapse is that it isn't solving the problem. Criminals aren't going to buy a legal, semi-automatic assault rifle when they can buy an illegal, full-auto version for cheaper. They're not worried about breaking the law -- that's what makes them criminals in the first place.

Posted by Guy at 5:25 PM No comments:
Email ThisBlogThis!Share to TwitterShare to FacebookShare to Pinterest

I was reading this article on CNN about a drought in the southeast. What I found disturbing is that it mentioned -- several times -- that the situation was "difficult" because all three states involved have Republican governors and senators.

"It's only going to antagonize somebody," said Charles Bullock, a political scientist at the University of Georgia. "You have three Republican governors. The delegations in Congress of these states are predominantly Republican, so it's not easy politically. There's really no easy way out of it."

The implication, of course, is that this would be a nice, easy problem if one of the states was Democratic -- sorry, no water for you.
Posted by Guy at 9:21 AM No comments:
Email ThisBlogThis!Share to TwitterShare to FacebookShare to Pinterest
Newer Posts Older Posts Home
Subscribe to: Posts (Atom)